RPCV Phoenix is always trying to raise money through merchandise sales, special events, and other activities. Why? Because our desire to make the world a better place did not stop after we got off the plane to come home after our Peace Corps Service.  The Returned Peace Corps Volunteers of Phoenix has donated to several Peace Corps Partnership Program projects, most of which are being completed by a volunteer from Arizona.

What is the Peace Corps Partnership Program?

The Peace Corps Partnership Program connects Volunteers and their communities with the private sector in the U.S. and around the world in order to fund small, sustainable, grass roots projects.

Volunteers are invited to submit proposals to the Partnership Program to obtain financial assistance in support of community projects. In order to receive project funding through the Partnership Program, the community must make a 25 percent contribution to the total project cost and outline success indicators for the individual projects.  The Peace Corps then posts the project online to raise funds for the project. 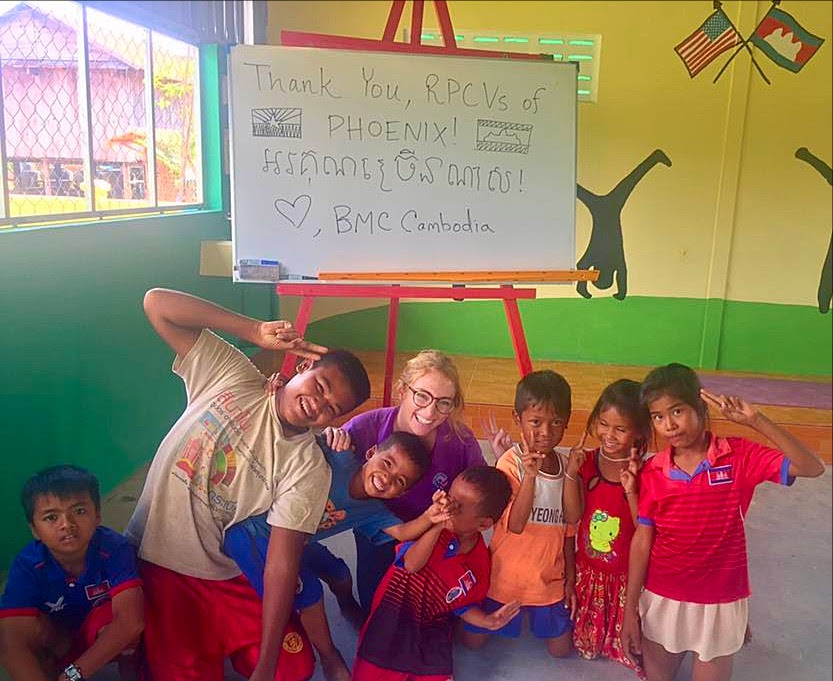 RPCV Phoenix donated over $400 to complete the project funding for a community exercise center in Cambodia! This project was headed by Lindsay Wilson, who grew up in Phoenix and is now serving in Cambodia.
Background:

In July of 2016 our RPCV Phoenix group received a request from a current Peace Corps volunteer, Lindsey Wilson, serving in Cambodia (and also grew up in Phoenix). Her request:

“In my rural village, students and teachers have identified the need for a safe and accessible space for children (especially girls) to exercise. In September, a community exercise center will be built where dance/aerobic classes, yoga, and nutrition education will be taught to encourage healthy lifestyles. I thought I would reach out to see if any RPCVs or interested people from my home state would like to donate to my project!” Click here to see a video!

Camp GLOW (Girls Leading Our World) Thailand is a six-day camp that empowers young girls throughout the country.
https://www.facebook.com/glowcampthailand

The RPCV Phoenix group sponsored with the camp with a $1,000 donation through Peace Corps Partnership – raised through membership dues and fundraisers

Students learned about Self-esteem and Gender Equality in separate morning classes on the first full day. Through discussions and activities, they explored and shared their ideas and created group presentations.

In Self-Esteem, students examined themselves in terms of their characteristics, what they believe they do well, and how they

can lift up others. They discussed the
importance of believing in yourself and participated in a bucket activity in which

rocks represented the negativity that weighs us down and paper represented the positivity that lightens our load. In Gender Equality, the students discussed the differences between gender and sex and whether gender affects ability and self-image. The girls were able to build on these important concepts throughout the remainder of the camp.
Sex Education and Puberty were tough topics, but everyone had a great time during the sessions! During sex education, the girls discussed who has sex and reasons why, they learned about HIV and teenage pregnancy, and they were able to practice safe sex condom usage. HIV and teen pregnancy rates are alarmingly high in Thailand, so for the majority of the girls, this was their first exposure to such critical information. The puberty session allowed girls to discuss the changes their bodies will go through, particularly menstruation and breast health. Games like Puberty Jeopardy and Pin the Pad on the Underwear helped keep things fun and informative.

During an evening Sharing Circle, everyone held a candle and shared something they had learned or received from the camp. It was a beautiful night of reflection!